As with Axial-flow fans these fans move air or other gases but as the blades are mounted at right angles to the disk the air is moved in the opposite (outward) direction; sometimes called radial-flow fans.  Centrifugal industrial fans tend to produce more force than Axial-flow fans of the same size and speed, due to the additional pressure produced by the angled blades.  A Centrifugal fan resembles the spirals on a shell with a central hole.

There are 6 types of Centrifugal Fans commonly used for a wide variety of applications:-

Centrifugal fan with airfoil (AF) blades  –  most efficient and lowest noise level.   Used for a wide range of applications in many industries. They are used extensively for continuous service at ambient and elevated temperatures in forced and induced draft applications in the metals, chemical, power generation, paper, rock products, glass, resource recovery, incineration and other industries throughout the world.

Centrifugal fans with backward-curved (BC) blades – These fans have an efficiency nearly as high as the airfoil (AF) design and due to its robust design is often used in high-pressure applications. The advantage is found in their single-thickness, curved plate blades that prevent the possibility of dust particle buildup inside the blade.

Centrifugal fans with backward-inclined (BI) blades – These fans have simple flat blades, backwardly inclined to match the velocity pattern of the air passing through the fan wheel making it more economical in production.  These fans are more suitable for use in high-volume, relatively low-pressure, clean air applications.

Centrifugal fans with radial-tip (RT) blades – these blades are curved

Centrifugal fans with forward-curved (FC) blades – as the name suggests these blades curve forward in the direction of the rotation and as such the flow rate is much larger than any other Centrifugal fan of same size and speed.  Mainly used in small furnaces, air conditioners and electronic equipment when compactness is more important than efficiency.   The rotating device used (often called a “squirrel cage”) generates the highest volume flow rate (for a given tip speed) of all the centrifugal fans. Therefore, it often has the advantage of offering the smallest physical package available for a given application.

Centrifugal fans with radial (RBs) blades – The flat blades of this type are arranged in a radial pattern and are rugged and self-cleaning, able to handle high pressure situations such as corrosive fumes and abrasive materials but are of low/average efficient.  They are often fitted with erosion-resistant liners to extend rotor life. The housing design is compact to minimize the floor space requirement.

The dimensions of a Centrifugal fan range from less than a third of a metre (less than a foot) to over 5 metres (greater than 16 feet). 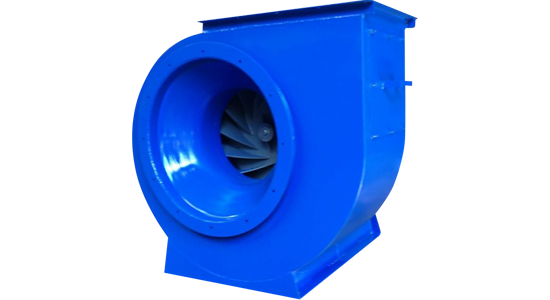 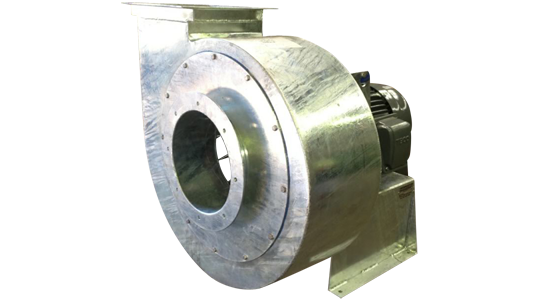 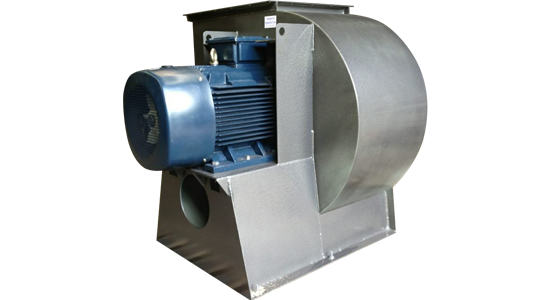